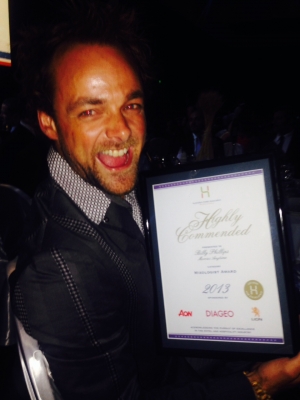 With hardly any time between tux and gown drycleans, the red carpet lead from the Gold Plate Awards ceremony into another, for the crew at Morries Anytime.

Last night, Monday 11 November 2013, was another night of glitz and glamour at the Crown Perth with the Annual AHA-Aon Hotel & Hospitality Awards for Excellence 2013.

These prestigious awards have been celebrating and acknowledging excellence in the hotel and hospitality industry for more than a decade. Over 1200 guests consisting of Entrants, Sponsors, Judges and Members enjoyed a night of celebration and entertainment. Winners from were announced from 42 categories and a strong lineup from the best of WA’s hospitality.

Representing along with the crew from Morries Anytime, were owners Alex Brooks and Anthony Janssen who were very excited to have made the finalists cut and being nominated in not one but five categories; forCocktail Bar Award, New Venue Award, Contemporary Bar Menu Award, WA's Best Regional Venue of the Year and Mixologist Award (featuring General Manager Billy Phillips).

The Morries team took out the Contemporary Bar menu award over some really stiff statewide competition. General Manager and Mixologist Billy Phillips didn’t come home empty handed with a highly commended certificate being awarded to him for his passion and skills behind the bar. This commendation rates Billy Phillips as one of the states best Bartenders.

This is the third awards ceremony and Finalists Nomination for Morries after taking out the Award for Hospitality & Excellence at the local MRCCI Business Awards and becoming a Finalist in two categories at The Gold Plate Awards 2013, last month. Strengthening Morries vision to be recognised as a leading hospitality operator in the region.